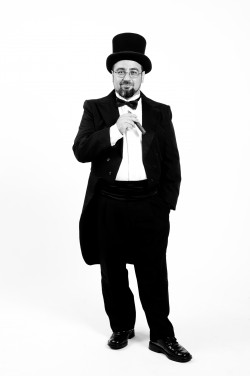 John grew up in Eugene, Oregon and floated from job to job trying to find something that inspired him. After working as a retail manager for several years, he accidentally stumbled into a weekend job with ABC Sports as a Runner in Corvallis. After one weekend with the television crew – he was hooked. With a little convincing, John ended up traveling and working a half dozen games that season, and searched for an opportunity to learn the field. With the help of some friends, he eventually joined a small production company based out of Hewlett Packard.

John soon began running camera for lectures and presentations, and eventually became a project manager. He worked with ABC for the next two seasons as well, working in Oregon and Washington whenever the opportunity presented itself. Sadly in 2005, HP began reducing its Corvallis workforce and the organization that was in charge of video production eventually dissolved. Rather than search for what he considered a “real job”, John decided to start his own company and Horsepower Productions was born!

John's great! He delivered a very challenging video of a highly technical product that included video, still footage, animation and illustrations. He coordinated the entire photo/video shoot, took excellent shots, had great ideas for how to present the product, and worked extremely hard in editing, re-editing and narration to deliver the absolutely best product, on time, and on budget. Our Engineering, Sales and Management team all said the work exceeded expectations, and the video got great response when shown at a major industry conference. I would use John again in a heartbeat.
Katherine Cleland
CEO, Founder at Cleland Marketing